I’ve got another hot new release for you today. Epic Love by JJ King is the first in a series of four Romance on the Go™ titles called Masterclass. Sexy professors make all the difference when it’s time to learn… 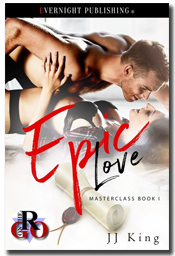 Zoey Matthews’ life is finally back on track after years of pretending to be the perfect suburban wife. She’s doing what she wants now, and has returned to her alma mater to complete a Masters in English literature. Despite trying, she doesn’t quite fit in with her classmates, which is why she’s so excited when her friend Rachel, a professor in the department, introduces her to some of her co-workers.

Dr. Sebastian Lane makes Zoey’s knees go weak the moment she sees him. After years of being lonely, she’s finally found someone who makes her body come to life, so when the sparks fly, she follows where they lead.

Will they lead her on a mysterious adventure or straight into his arms?

Bash reached out a hand and laced his fingers with hers, pulling her in until the length of her body pressed against his. The nervous anticipation she’d had earlier when she’d thought about being alone with him returned ten-fold. Her heart raced, pumping heated blood through her limbs, lighting her nerves on fire. She folded into him, staring up at him through a haze of lust.

All signs of excitement faded from Bash’s face, replaced by an instant awareness. His mouth slipped open as he gasped in a breath, drawing Zoey’s attention to his beautiful lips.

They were so tempting, firm yet soft, and she knew they were delicious. The tiny taste she’d gotten in the cab now seemed a tease, a promise of more. She raised up on her tip toes and reached for his neck with trembling hands.

Bash met her halfway, scooping her into his arms. He twisted and pressed her against the wall just next to the obscure opening they’d discovered together. She gasped in desire when his big hands delved into her hair, tugging at the roots, as his lips crushed against hers.

He tasted different this time, like the red wine they’d sipped downstairs. But, underneath, was the real flavor, his unique taste, and it drove Zoey wild. She licked out her tongue, lapping at him, wanting to taste all of him, wondering what his body would taste like.

The fine hairs all over Zoey’s body stood on end, straining to be touched. Zoey ground her hips against Bash’s abdomen, urging him on, needing so much more than he was giving at the moment. His response was to tug her hair even harder, to the side, and settle his teeth and lips on her neck.

The feel of his tongue as it slid over the tiny hurt he’d inflicted with his teeth made Zoey cry out. She’d never been a vocal lover, had never been swept away like her favorite heroines in the books she loved to read. Even before Hayden, she’d enjoyed sex, but it hadn’t been mind-blowing or awe-inspiring. This, though, this time would be different. Bash was different.

His torso held her in place as his hands left her hair and began to explore her body. Up and down her length he traveled, touching softly then pulling and grabbing with intent. He moved so quickly, touched so much, that she never had a moment to acclimatize. Zoey’s nerves danced, exploding all over, driving her into a frenzy. She writhed against the wall, clutching at his neck and shoulders, clawing her nails into his skin in desperation.

Bash growled deep in his throat and grabbed her around the waist, lowering her to the floor. Zoey’s legs wobbled as her knees threatened to give way. She sucked in deep gasps of oxygen, trying to understand why Bash had stepped away from her. He crossed the room quickly, his gait a little crooked, and slammed the door to the storage room shut, deftly locking the door.

“I don’t want any interruptions,” he rasped.

Zoey’s heart soared and she ran to him, throwing herself into his open arms and sealing her lips to his. His tongue flicked out to taste her and she bit down on it, then sucked it into her mouth. His arms came around her body and lifted her and then she was being walked backward while he licked and sucked her lips. She yelped and dissolved into giggles when she flew through the air and landed on a couch covered with a white sheet.

Bash’s long body covered her in an instant and his lips returned to hers. His clever hands danced over her clothes, moving down over her hips to the hem of her dress. Zoey threw back her head, encouraging him to move to her neck, one of her favorite erogenous zones, and then sighed in abject pleasure when he licked from her jaw to her clavicle. His teeth grazed the bone there, then moved to her shoulder, making every part of her brain melt. Only one thought remained, that she needed to touch him.

Zoey reached for his sweater and started tugging it over his head. Bash paused from his goal for a moment to tear the offending piece of clothing off his body then tossed it to the floor. She froze. Her entire awareness narrowed and all she could see or hear or know was Bash’s chest. His shoulders were wider than she’d ever seen on a man in real life, then he cut down at an angle to a waist that was…she swallowed hard and reached out tentatively, stroking her fingertips over the indentations his heaving muscles made. Her mouth watered.

A second later, Bash’s fingers grasped the top of her tights, along with her panties, and pulled them roughly down her legs. They stopped abruptly on her shoes and he cursed, then pulled her heels from her feet and shucked her tights, leaving her naked from the waist down and completely ready.

They locked eyes, neither moving as they each breathed raggedly. Bash’s eyes questioned her, asked for permission, as his hand hovered above her junction, waiting to dip into her hot sex.

Zoey looked up at him through half-closed eyes, feeling more desirable than she ever had, and nodded. She opened her legs to accept him.

His eyes stayed on hers as he slipped a finger into her folds and slid against the bundle of nerves there. The sensation was so intense that she mewled and thrust her hips up, begging for more. With a dead sexy grin, Bash let his digits move lower, finding the opening to her body, and thrust inside. 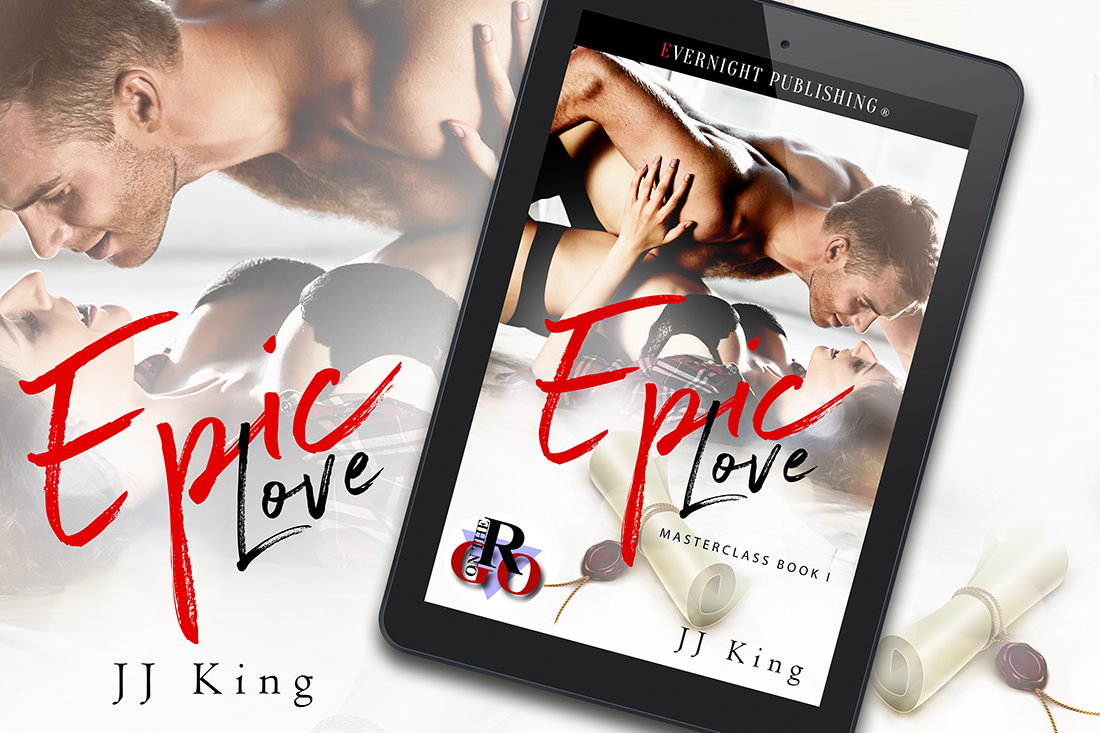 For a limited time, get Finding the Right Words by JJ King for .99¢!

I love writing and reading and eating sushi with friends. A world devoid of my girls is a barren place. My heart lives in my son and with my family, and I love life, and cats, and wine. I write contemporary and paranormal romance, and I love chatting with readers, so check out the links below and swing by for a chat.